There are generally two kinds of cables: armored cable and non-metallic cable, that is, AC cable and NM cable. What are they and their difference? 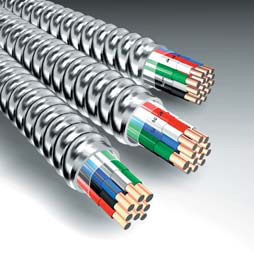 BX is one of the earliest types of electrical cable developed for both residential and commercial uses in the early part of the 20th century. It is a collection of plastic-coated insulated wires (typically 14- or 12-gauge), bundled together and protected by a ribbon-like metal sheathing. Like any other cable, if the armor is nicked, cut, or shredded, the wires inside can be compromised. BX’s armor, while much stronger than NM’s vinyl, can still be pierced by a determined and well-placed nail or screw.

When electrical wiring needs extra protection, metal-clad (MC) cable is a great solution, and is often required by electrical codes. Metal-clad cable comes in several varieties, but the type you’ll find at most home centers is three insulated wires (two circuit conductors and a green equipment grounding conductor) protected by a flexible armor usually made from aluminum. MC cable is identified by the gauge of the wire, not the diameter of the armor. The most common sizes are 14 gauge, 12 gauge and 10 gauge. It offers protection from fire, vibration, gnawing pests and physical harm in general.

Hybrid fiber-coaxial (HFC) is a telecommunications industry term for a broadband network that combines optical fiber and coaxial cable. It has been commonly employed globally by cable television operators since the early 1990s.

In a hybrid fiber-coaxial cable system, the television channels are sent from the cable system’s distribution facility, the headend, to local communities through optical fiber trunk lines. At the local community, a box called an optical node translates the signal from a light beam to electrical signal, and sends it over coaxial cable lines for distribution to subscriber residences. The fiberoptic trunk lines provide adequate bandwidth to allow future expansion and new bandwidth-intensive services. These are some common kinds of AC cable,now let’s know something about NM cable. It has become a mainstay of residential wiring since it became available almost a century ago. NM is a quick, easy way to get power where you want it and is relatively cheap compared to other methods of wiring. The construction of NM has evolved from a braided-fabric outer jacket surrounding two conductors (no ground wire) into the color-coded, plastic-jacketed, multi-conductor cable assembly we use today.The most common type of NM used are 2-wire and 3-wire.

switch wiring, the white wire is sometimes used as a hot wire.

A 3-wire NM contains a black, red, white, and a bare ground wire. The black and red wires can be used for 120 volts A and B phases, or as travelers in 3- or 4-way switch wiring.

No matter which kind of wire it is , once it is nicked, cut, or shredded, the wire can’t be used any more. How to process these wire and cable scrap? For NM wire within 20 mm, copper cable granulator is suitable for processing. You can get pure copper granule by copper cable granulator. For other wire and cables, wire stripping machines has good effect. Amisy 918-B wire stripping machine even can process BX cable.

Get The Latest Quotation